Photo enthusiasts rejoice! The new flagship of the spectacular Rebel Line, the EOS Rebel T5i, is here to renew your artistic side with amazing imaging features and full-featured functionality. Users will be impressed at how simple and intuitive it is to create breathtaking photos with ease. The incredible image quality and performance starts with an 18.0 Megapixel CMOS (APS-C) sensor and Canon’s superb DIGIC 5 Image Processor. Combined with an extensive ISO range of 100–12800 (expandable to 25600 in H mode), the EOS Rebel T5i boasts crisp, detailed images, even in low-light situations. A continuous shooting speed of up to 5.0 fps allows for fast action capture. 9 cross-type AF focus points help ensure crisp focus throughout the frame, and the Hybrid CMOS AF system enables speedy and accurate autofocus when shooting in Live View mode. In addition, the camera is compatible with Canon STM lenses for smooth, quiet AF performance. And the performance doesn’t stop with photos. EOS Full HD Movie mode with Movie Servo AF makes shooting high quality movies easy, and the brilliant Vari-angle Touch Screen 3.0-inch Clear View LCD monitor II makes composing fun. Seven Creative Filters, now viewable in real time, puts composition control directly in your hands and is just one of the many features of the EOS Rebel T5i that is sure to renew your creative soul.

With 14-bit analog-to-digital conversion, the EOS Rebel T5i captures and records images with remarkable gradations and detail in subtle tones and colors, resulting in more realistic and detailed images. By recording up to 16,384 colors per channel, the EOS Rebel T5i ensures that the fine detail found in subjects like foliage, sky and water are preserved and recorded with a tremendous level of accuracy, ensuring gorgeous results.

Thanks to its DIGIC 5 Image Processor, the EOS Rebel T5i features an expanded ISO range of ISO 100–12800 (expandable to 25600 in H mode) that makes shooting possible in situations previously unthinkable without flash. The EOS Rebel T5i, with the DIGIC 5 Image Processor’s remarkable noise-reduction technology, performs brilliantly in low-light shooting. Used with one of Canon’s EF or EF-S lenses with Optical Image Stabilizer, the EOS Rebel T5i can record beautiful images even when light sources are scarce.

The EOS Rebel T5i’s DIGIC 5 Image Processor works with the camera’s CMOS sensor to deliver images with incredible detail in more situations, without the need for artificial light sources. With the power of the DIGIC 5 Image Processor, the EOS Rebel T5i can achieve higher ISO sensitivity, can shoot up to 5.0 fps continuously and can even perform advanced functions like HDR Backlight Control, art filters, lens correction and much more. The camera’s brilliant imaging core supercharges every facet of still and moving image capture.

The EOS Rebel T5i can shoot up to 5.0 frames per second, continuously. Thanks to the enhanced shutter mechanism, mirror drive and camera sensor, the EOS Rebel T5i is ready for action; whether capturing that perfect expression, the game’s winning goal, or the bride walking down the aisle, the EOS Rebel T5i delivers the speed and performance to guarantee results. 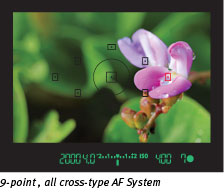 The EOS Rebel T5i is equipped with AF features that ensure speedy, accurate and continuous AF every time. When shooting through the viewfinder, the EOS Rebel T5i has advanced autofocus with a 9-point, all cross-type AF system (including a high-precision dual-cross f/2.8 center point) for accurate focus whether the camera is oriented in portrait or landscape position. An AI Servo AF system achieves and maintains consistent focus with an exceptional degree of reliability. 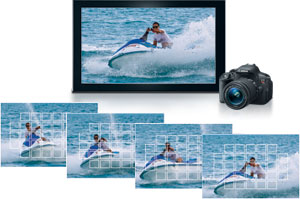 The EOS Rebel T5i offers easy-to-use, professional video capture without compromise. Capable of shooting in a number of recording sizes and frame rates, the EOS Rebel T5i is the new standard for performance, quality and simplicity. The EOS Rebel T5i enables easy manual control of exposure, focus and Live View features, even in-camera editing! Movie Servo AF allows continuous autofocus tracking of moving subjects while recording video. When shooting video with one of Canon’s STM lenses, such as the new EF-S 18–55mm f/3.5–5.6 IS STM, Movie Servo AF takes advantage of the lens’ stepping motor for smooth and quiet continuous AF. With an STM lens attached, the EOS Rebel T5i is the standard for SLR moviemaking performance!

The EOS Rebel T5i has an internal stereo microphone for improved audio capture and a wind filter feature to reduce wind noise when shooting outdoors. Sound recording levels can be manually (up to 64 different levels) or automatically controlled. A built-in attenuator is also provided to reduce audio clipping. For more advanced audio recording, the EOS Rebel T5i is compatible with many third-party electret condenser microphones with a 3.5mm diameter plug.

With the Video Snapshot feature, the EOS Rebel T5i can capture short video clips (of 2, 4 or 8 seconds) then combine them automatically into one video file as a snapshot or highlights “album”. With no editing needed after shooting, the compiled video is perfect for sharing online or displaying directly on an HDTV via the camera’s HDMI port. Additionally, stills can be recorded during video shooting simply by pressing the camera’s shutter button. During playback, video clips in an album can be reordered or deleted.

Sharp and Clear, with Tactile Controls.

The EOS Rebel T5i comes with a Vari-angle Touch Screen 3.0-inch Clear View LCD monitor II. Using capacitive technology similar to today’s popular mobile devices, this screen is touch-sensitive and delivers intuitive touch panel operation. Two-finger touch gestures can be used for zooming or changing images. Menu and quick control settings can be accessed, and focus point and shutter release can be activated with the touch of a fingertip using Touch AF. Displaying fine detail (at approximately 1.04 million dots), this screen is perfect for composing and reviewing images. Thanks to a solid construction between the monitor’s resin-coated cover and the liquid crystal display, reflections are minimized, and the display can be viewed, without glare, from any number of angles. The LCD’s surface is treated with a smudge-resistant coating to minimize fingerprints and maintain a bright, clear image display.

The EOS Rebel T5i features Scene Intelligent Auto mode, which incorporates a number of Canon technologies to deliver the best possible exposure. Joining Picture Style Auto, Automatic Lighting Optimizer, Automatic White Balance, Autofocus, and Automatic Exposure, Scene Intelligent Auto mode analyzes the image, accounting for faces, colors, brightness, moving objects, contrast, even whether the camera is handheld or on a tripod, and then chooses the exposure and enhancements that bring out the best in any scene or situation. 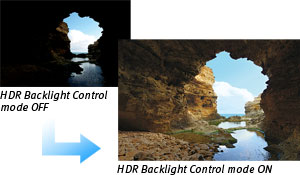 The EOS Rebel T5i’s HDR Backlight Control mode ensures that backlit subjects are not recorded too darkly. By shooting three consecutive shots at different exposures (underexposed, correctly exposed and overexposed) and then combining the images, the final result maintains detail in both the shadow and highlight areas, ensuring the backlit subject is properly exposed.

Seven Creative Filters that can be displayed in real time

To add to the fun and creative possibilities available with the EOS Rebel T5i, the camera has seven different creative filters that can dramatically alter the mood and visual effect of any particular scene. Creative Filters include Grainy Black and White, Soft Focus, Fisheye Effect, Toy Camera Effect, Miniature Effect, Art Bold Effect and Water Painting Effect. Each effect can be applied in three different levels (low, standard and strong), and easily previewed on the LCD panel in Live View. Since the filters can be applied to the image after shooting, it’s easy to try several effects on the same shot during post-process.

Cleaner Images, Even at High ISO.

To enhance its already admirable high ISO shooting capabilities, the EOS Rebel T5i features an intelligent Multi Shot Noise Reduction tool that reduces noise even further than the camera’s sensor and the DIGIC 5 Image Processor do. With Multi Shot Noise Reduction activated, the camera takes four consecutive shots, merges and aligns them. This eliminates more noise than the Rebel’s traditional Noise Reduction filter, with little or no apparent resolution loss. Moving subjects are even optimized to minimize subject blur! Thanks to this clever feature, high ISO shooting has never looked better.

Additionally, the EOS Rebel T5i is compatible with Eye-Fi* SD cards, which are outfitted with a Wi-Fi transmitter (IEEE 802.11b/g) and an internal antenna for wireless, high-speed transfer of images. With an Eye-Fi card installed, the EOS Rebel T5i can display the Eye-Fi’s connection status and error notes with ease, for fully functional wireless uploading of images directly from the camera.

A Comprehensive System of Optics Perfect For Video and Stills.

Compatible with EF and EF-S lenses

The EOS Rebel T5i is compatible with all Canon lenses in the EF lineup, including compact and lightweight EF-S lenses, ranging from ultra-wide angle to super telephoto lenses and including the STM series optimized for video shooting. Canon lenses employ advanced optical expertise and micron-precision engineering to deliver outstanding performance and deliver beautiful results. Special technologies like Canon’s Optical Image Stabilizer help to minimize the effect of camera shake, effectively adding up to four stops of light; STM lenses even feature a stepping motor for smooth and quiet continuous autofocus while capturing video. With an array of lenses perfect for travel, sports, still life and everything in between, photographers can truly maximize the quality and performance of their EOS Rebel T5i.

To help explain the specific function of features found on the EOS Rebel T5i, the Feature Guide displays a simple description helpful in determining the applicability for the situation at hand. It is displayed in each shooting mode, during mode dial operations, and for Quick Control screen functions. It appears automatically when a function is selected – a lifesaver when trying to determine the best mode or function for the next picture. The feature guide works automatically by default, and can be disabled easily through the camera’s menu.

With the optional GPS Receiver GP-E2 attached to the hot shoe or the digital terminal, the EOS Rebel T5i can record location, including latitude, longitude and altitude, and has the ability to track the trajectory of movement with its logging function. An electric compass records the camera’s orientation during each shot, and world time information is recorded through GPS syncing.

To create images suitable for sharing by email or online, the EOS Rebel T5i can resize JPEG files, in-camera, of varying pixels (aspect ratio cannot be changed, only the image size can be decreased) while leaving the original image untouched.

Photographers can share their images in book form with the EOS Rebel T5i’s convenient Photobook Set-up feature. Users can easily choose specific images, images in a folder and even all images, then specify their sequence and layout. The results can be printed in book form with ease.

To help organize images recorded to the camera’s storage, the EOS Rebel T5i makes it simple to rate individual images from one star to five. Therefore, image browsing, printing and slide shows can be based upon those ratings.

Newly featured on the EOS Rebel T5i, the SCN setting on the Mode dial activates a choice of scenes on the menu screen for quick access to features like Night Portrait, HDR Backlight Control, Handheld Night Scene and more.

Style Name: Body + 18-55mm Lens
Technical Details
Please login to post a comment.
Popular Coupons
Latest News
Indiandeals2buy
<p>Find hot deals and exclusive offers to save money on your favorite products. The cheapest deals on toys, laptops, cameras, computers, home needs, and many more products…</p> <p>indiandeals2buy.com is a participant in the Affiliate Programs, an affiliate advertising program designed to provide a means for sites to earn advertising fees by advertising and linking to the relevant websites.</p>
Useful Links
Members
Join our newsletter