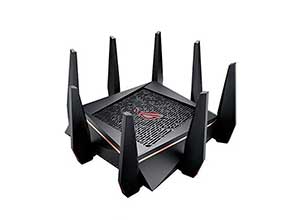 Amazon offering a deal on Asus ROG Rapture Tri-Band WiFi Gaming Router. Clip Rs.1000 inpage coupon to get it for Rs.21460. Bank offers applicable. Shipping is free w/Prime or on orders of Rs.499 or more.

Other winning features include Gamers Private Network support with wtfast, congestion-busting Wi-Fi Radar, the Game Radar ping map that shows you where the fastest servers are, and VPN Fusion for simultaneously running a VPN alongside your web connection. To defend your network, ROG Rapture GT-AC5300 features AiProtection Pro, a state-of-the-art intrusion prevention system powered by Trend Micro™ technology. It protects your gaming network from external attacks and threats, neutralizing them before they can reach your network or devices.

Even if your PC’s security software isn’t turned on — to get around blocked games, for example — AiProtection Pro still protects your network from attacks and intrusions, giving you added peace of mind. GameFirst V is a ROG-exclusive tool that comes with ROG motherboards, laptops and desktops to optimizes network traffic for PC online gaming. Not only that, simply click ROG First, level 2 acceleration can be automatically enabled to ensure faster and lag-free online gaming. Game Boost analyzes the network traffic and prioritizes gaming packets, giving games a second level of acceleration for the best possible performance. 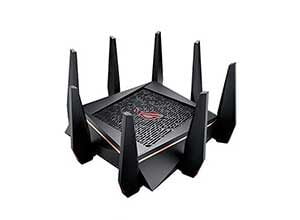