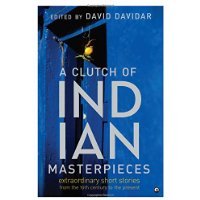 A Clutch of Indian Masterpieces At Rs.347

Details of A Clutch of Indian Masterpieces: Extraordinary Short Stories from the 19th Century to the Present

The stories in this collection will make you see the world differently as the greatest stories always do. The thirtynine short stories in this book will blow you away. Starting with a ghoststory by Rabindranath Tagore, India’s most famous writer and ending with a fable by Kanishk Tharoor, a writer who has come of age in the twenty first century, these literary masterpieces showcase the extraordinary range and diversity of our story telling tradition. The first recognizably modern Indian short stories were written in Bengal (by Tagore andothers) in the second half of the nineteenth century and writers from other regions werequick to follow suit, often using the form to protest colonial oppression and the various illsafflicting rural and urban India. Over the next century and a half, some of the finest writers the world has seen produced outstanding fiction in every conceivable genre. Many of these stories find a place in this volume, as does work by emerging talent that has never been published in book form before. Here you will find stories of classical realism, ones rootedin folklore and myth, tales of fantasy, humour, horror, crime and romance, stories set invillages, small towns, cities and the moon. They will entertain you and shock you, they will lighten your mood and cast you down, they will move you and they will make you reflect onlife’s big and little questions. Most of all, they will make you see the world differently as the greatest stories always do.

Description of A Clutch of Indian Masterpieces: Extraordinary Short Stories from the 19th Century to the Present

‘The mother of all compilations arrives in the form of an exhaustive book of short stories, A Clutch of Indian Masterpieces. A book doesn’t get grander than this…All in all, a carefully put-together, precious collection of short stories that begs to be read over and over again. And with every reading, like all great things, the stories are capable of throwing up fresh new interpretations.’—New Indian Express

‘The handsome, inky blue tome is indeed an extraordinary collection of masterpieces, hewn from (the) stories that make up the great Ganga of Indian writing…What’s best about this anthology is that though it salutes the hoary old masters of the Indian canon of Manto and Tagore (with their familiar and exquisite stories of mangoes and tongas), the book also carries the stories of many subsequent and outstanding writers…With an excellent foreword by Davidar, this is a treasure.’—Malavika Sangghvi in Mid-day

‘The publication of such an anthology is a cause to celebrate, to read and to thank our translators and our writers. And it is an occasion to thank our editor.’—India Today

‘This anthology showcases some of the very best stories in a variety of dazzling styles.’—Asian Age

‘Hands down the most beautiful book of the year – and one you must own.’—Hindustan Times/Brunch

Book Description of A Clutch of Indian Masterpieces: Extraordinary Short Stories from the 19th Century to the Present